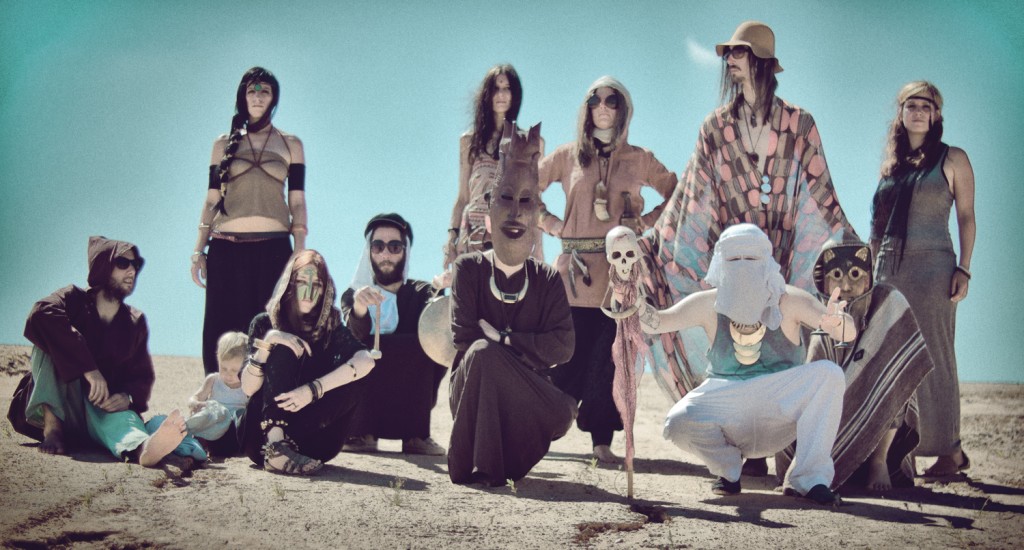 Datashock are invited to play the  STR-Camp Festival in Lithuania this july, so we are happy that Ore (a lithuanian musicwebsite) was doing this interview with us!

Since long past 2003 there exists a group of girls and boys from Saarlouis – a little German town near
France and Louxembourg. They’ll play with anything they find at their reach. The music Datashock produce is
as colourful as the costumes they wear. All that may ring a bell with Sweden’s Goat, though instead of
Scandinavian African vibes Datashock are more in the vein of improvised Pink Floyd, bits of Amon Düül and Harmonia.

Finally, we’re proud to announce that STRCamp has found a new home in the summercamp ‘Deimantas’
near Trakai. So this year ‘Deimantas’ will be filled with the familiar and heartwarming sounds well-known from last year’s STRCamp,
‘D.O.S.’ happenings, etc. All a bit darker, all with a subtle twist. All quite unexpected and slightly improvised.

Where are the origins of Datashock?

We know each other for quite a long time. You can easily say we grew up together. That means we shared nearly everything: we went through a similiar socialisation process, growing up together in a small town in germany surrounded by boredom, discovering punk, hardcore and skateboarding in the early 90s. We started to play music and to organize shows… The main origin is this similarity. Friendship, it‘s sort of an ongoing family business for 20 years now and that‘s beautiful. Although members of the band moved to different cities to pursue different goals we still managed to keep Datashock cohesive and going.

Your collective is rather open community and you don’t have stable line-up. Have you ever counted how many people went through Datashock?

Well, theres is a core in Datashock. This core consits of six people nowadays. During the past years we played with a lot of friends. Some of them played more often/with as Datashock some less. But you shouldnt overemphasise the fact of these collaborations. It‘s nothing special, actually: everyone who is into Free Improvisation plays with different people all the time. It‘s part of the process, isn‘t it? But the idea of Datashock as sort of a collective or community is still important to us, because we feel its way more comfortable and necessary to appear as an open community. Less rugged individualism and first person shooting and less an organized entity of a band. The pragmatic side of this approach: It‘s not just that we can play with more people, we can also size down and perform with Datashock as a trio or duo (for example if some of us don‘t have the time to play at some date for whatever reason). That makes everything easier for us. The core of six people isn‘t living in the same city anymore. We all have day-jobs and so on…. That makes it sometimes hard to come together. But those organisational difficulties are no a problem, because as an open community we‘re always able to perform. But to answer your question: Too lazy to count. No reason to do it.

There is „neo-hippie“ definition in your collective description. What neo brings to well-known hippie culture?

As you might know: every band or artist has to grapple with terms. For the most it‘s not us coining phrases or terms, it‘s other coming up with that stuff. We are aware of the terms and phrases and the effects that come with it but we don‘t mind. We‘re not really bothered with people labeling Datashock as Hippie and /or Krautrock. Why should we? In fact we are influenced by the so called „Counter Culture“. And yes, we have our own romantic imagination of those times and we also have a critical relation to it. It‘s not our intention to say „those times were better“, we‘re not nostalgic. But our impression is that in those times there have been some thoughts about alternative ways to create society which still aren‘t checked out. There are still some open doors no one went through. We are interested in thoughts and attitudes, the optimism, the creativity and the courage and will to think different, to think about alternatives. Looking at the current state of things it all seems to be considered as super complex and difficult: be it society or whatever. To us some things are still very true and easy to say or even easy to believe in: Fuck Captalism, Stop War, Power to the People, Love Love. Pretty basic. Pretty hippie. Still important.
But we also have this connection to the well known Punk spirit. The title of our album „Keine Oase in Sicht“ (no oasis in sight) is our way to say: „No Future“. But instead of the nihilism articulated through (a lot of) punk we try to bring times to mind where talking about alternatives wasn‘t that out of fashion.

Your music sounds more oriental desert-like than Deutsche Autobahn. Where do your inspirations come from? Btw, Lithuanian woods’n'lakes seems quite a place for your sounds, pagan spirit is still alive here.

Datashock is based on Free Improv, there‘s no other way it would work out. So everything that happens during recording-sessions and the way recordings sound depends on the participating people: their instruments, moods, mindset etc. and the atmosphere during those recording days in general,…We all love all different kinds of instruments, we collect them, and although we don‘t know how to play them „properly“ we use them. We love music, sounds. If someone likes to play a Sitar, then he or she should do it. Each instrument or sound evokes an image and a history. It‘s very intersting that an instrument has the power to evoke it‘s own myths in the mind of an listener. It feels like a sound is connected to a world of stereotypes (archetypes). Maybe we should stop thinking some guys straight from Deutsche Autobahn sound like an oriental dessert. Maybe it‘s more appropriate to say: that‘s how the Deutsche Autobahn can also sound like. But at the end of the day we don‘t care about imagined connections of sound and geography, because it‘s all pretty much accidental, too: the oriental desert fits as well as the lithuanian woods and lakes (which we are excited to see. None of us has been to your country before and we‘re really looking forward to visit!). It depends on the listeners mind. Reality, every-day-life looks different. (And when you look at our new record sleeve, you probably get the self-irony about it. Unfortunately not everyone can understand the German titles that also play with the images and imaginations. At least that was our intention.)

Have you ever participated in real shamanistic ritual?

Well, is there a difference between a real shamanistic ritual and the joy of a well made pizza? There is none!

Why, do you think, Krautrock withstood the test of time, while lots of genres disappeared into nothingness?

Like we said before: Terms are as necessary as they are useless. Krautrock again is a good example. What does this term mean? If you take so called Krautrock acts like Anima Sound, Amon Düül or Tangerine Dream aesthetically they have nothing in common. They sound totally different. So whats Krautrock? Krautrock describes different kinds of music made during a specific historical period at a specific places. Time and geography (and mabye the term) arouses the association that a couple of people that worked together, built a „scene“ in those times… but it‘s 2014 now. If you like to use the term it‘s okay. It‘s even funny in a way, because the term feels a little bit empty nowadays. For us it‘s a nice box to get in…

Regarding the survival of genres: Who cares! The music survives always. Nothing get‘s lost. Isn‘t it really characteristic for our time that everything is there? Everything is available (to a certain extend) with just one „click“. It‘s the time of coincidence and parallelism. Everything is archieved and someone, somewhere is thinking about a rerelease of whatever music recorded right now! Kids produce some glossy R`n‘B sounds to be released on Soundcloud, some other 15 years old guys buy a mpc to produce boom bap Hip-Hop, you have Abstract Club Music, Roots Reggea, Hardcore – you name it, simply everything…

How would you describe your own „gruselkraut“ sound? What spirits do you try to awake?

Gruselkraut as a term goes back to the times before the „rock section“ Sebastian und Christian (Pretty Lightning) have joined in Datashock. Before they joined, Datashock was more into Drone. darker and maybe a little bit spooky. But there wasn‘t and isn‘t really a concept behind the sound. It‘s is or was just a nice sounding word to describe certain qualities of the sound back then.
We don‘t try to awake anything. Datashock is about improvisation, which is about the very moment it‘s happening, about action and reaction. A dialouge not just between the instruments and players, but also an experiment about finding a place for the music in the room. Trying to work out the best with with any given atmosphere and under any given circumstances. And of course we have our limits which depend on our skills. So we try to work within (and without) our possibilities. Of course we try to connect all of our different personal approaches. We have to integrate the more rock orientated stuff , the quiet and soft sounds and the wild and noisy needs. So it‘s not that much about creating a landscape or one feeling. Its more about interaction, motion.

What is the most exotic place you’ve ever performed?

„Colour Out Of Space Festival“. Big stage and a lot of people. Normally it‘s quite the opposite.

Can you play to the same performances or this is not interesting for you?

We are lucky people. We can‘t, we never really tried and we are not interested. We don‘t really know which point causes the other, hahaha. Free Improv to us is a decision. Maybe some people will think: „What an old and boring story“, but trying to find the „perfect song“ isn‘t the „hot new shit“ as well (same applies to entertaining people on the dancefloor with two turntables). So we are not into composing and we are not into perfection. We don‘t like to avoid mistakes and surprises…

What happened in 2012, when you didn’t release any record? Before and after you recorded something each year…

There was a tape in 2012. And we worked on the new record. We recorded, we left the recordings on the hardware for a couple of months, we started to mix it…we took the time we needed. No need to hurry. No pressure. Plus: besides Datashock everyone is involved in other bands. Pretty Lightning, Yagow, Ea$y Homez, Schrein, Flamingo Creatures, Kolter, Phantom Horse, Alien Radio, Meudiademorte Records is still alive, Spam Records was born, Videoworks,…and so on. There is always something to do.

Is it enough to smoke or do you need something stronger to join Datashock caravan?

Hahahaha, we are not into drugpolitics. Not at all. There are no laws, no orders.
Thanks for your interest. We really appreciate this.